That’s right folks, I did what most developers who use Microsoft as their main development platform would never do…

Let me provide a little back story to this purchase decision.  I used a Titanium PowerBook G4 back in college and love the machine.  Overall, I’m a huge fan of OS X.  However, after 3 years with the machine I switched back to a Windows desktop.  Primarily because I could build a machine with lots of power for cheap.  I used that machine for 5 years until eventually it just became to slow for modern software.  I replaced that machine with an ASUS G51VX.  I chose the G51VX because I wanted the horsepower of a desktop in a laptop so I could carry it with me to work for meetings, on trips, etc.  However, after less than two years of ownership both the Hard Drives failed, and within a month of each other.

Granted, Hard Drive failures happen.  However, they shouldn’t happen so soon and they should happen so close together.  The laptop had Seagate drives, so I’m now four for four in Seagate HDD failures.  There will never be a 5th…  I replaced the drives with two Western Digital 750GB Scorpio Black drives.  And restored Windows, and experienced issues with the installation so I formatted and restored again, and then again.  See, I couldn’t get Windows update to run.  I would receive an error the service wasn’t running, even though it was each time I re-installed.  I suspected at this point it was a driver issue.  So the final restore I installed each driver one-by-one and tried Windows Update until, lo-and-behold I received the error message.

The culprit?  I bad HDD controller driver.  So, I scoured the Internet and finally found a working on on Intel’s website.  I installed the new driver and everything was good.  The downside, I just spent 2 weeks and several late nights restoring the laptop.  So, I decided, my time was worth more than that and I’d move to a historically more reliable platform.  I tried Ubuntu for a while and though I love the platform, most software that I use just doesn’t support it but does support Mac.  So here I am, with a shiny new laptop.

Oh and another thing, I have an idea for an application for iOS and Mac OS X.  Now that I have a Mac I can take some time to learn XCode and OS X and iPhone development and see if anything comes of it.

Here’s a picture of the new laptop. 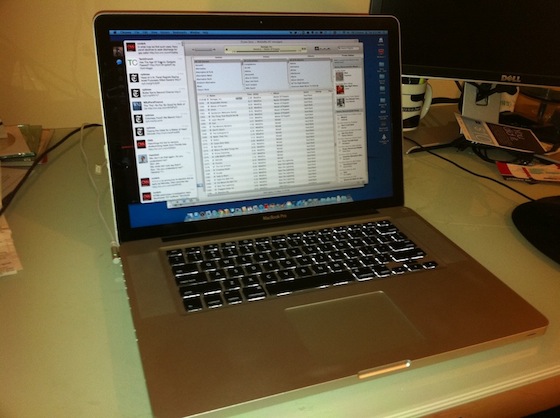 I've created this blog as my first attempt to give something back to the development community. My hope is that I can provide useful information to the development community that comes directly out of my experiences as a software engineer. My primary focus is Microsoft .NET technologies, however, I intend to touch on other development technologies as well as maybe an occasional posting about my experiences or recommendations on various gadgets. I need to run for now but look forward to more content from me soon. Until next time, Tim P.S. Comments are enabled and I strongly encourage commenting as a form of feedback (constructive criticisms only please) on my posts (I hope this will be as much of a learning experience for me as it will be for you).
View all posts by Tim →

This site uses Akismet to reduce spam. Learn how your comment data is processed.